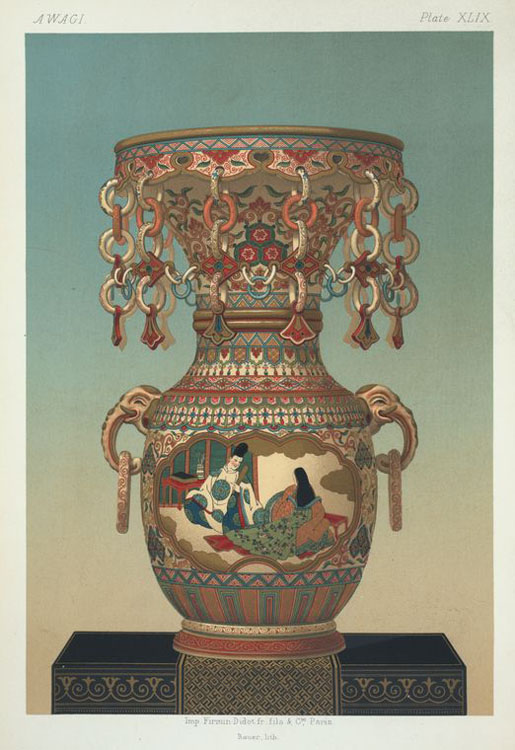 One of the finest examples of chromolithography ever produced.

The mid-nineteenth century ushered in a period when, with Japan newly opened to the West, European and American interest in things Japanese was intense, and Japanese influences in the decorative arts and design were extremely strong. In response to this interest, Audsley and Bowles, both members of the Asiatic Society of Japan, published this book, employing the highest standards and techniques for chromolithography. It was their feeling that only finely detailed illustrations in color could convey adequately the artistry of these Japanese objects. Before the advent of color photography, chromolithography provided for the most realistic rendering of an image. The technique was developed in the 1830s (previously, engravings were hand colored to produce color images) and was generally superceded by offset printing a century later. Lithography employs a printing technique in which an image is drawn on a highly polished stone and transferred onto paper using a printing press. In chromolithography, multiple stones, each with its own color value, are used, and the same sheet is printed on each stone in succession to produce a combined full-color image. The Firmin-Didot et Cie. produced the illustrations for Keramic using photographs as guides in preparing the lithographic drawings.