John Van Surly DeGrasse’s “The History of Venereal Disease including a Cursory View of the Symptoms and Treatment of the Primary Form of Syphilis,” medical dissertation, 1849. Medical School of Maine Records, Bowdoin College Archives. 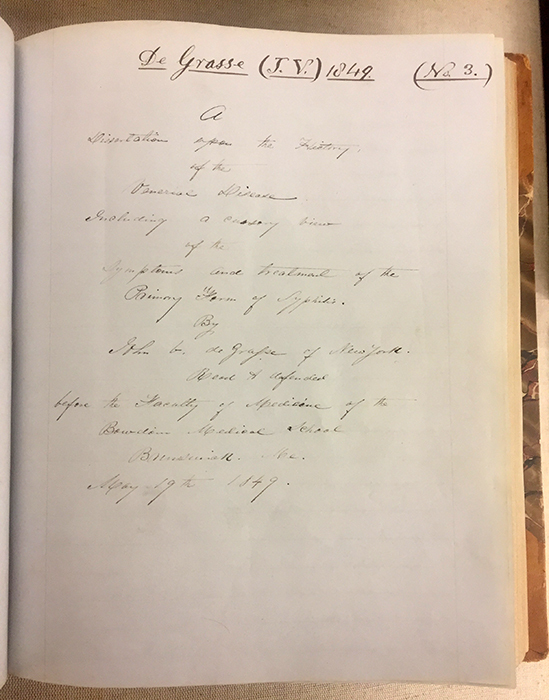 Before coming to Bowdoin, John Van Surly DeGrasse had studied in France and trained in medicine in New York. He opened a medical practice in Boston, and in 1854, was elected to the Massachusetts Medical Society as the first African American to belong to a medical association in that state. He was nominated by Massachusetts Governor John Andrew, Class of 1837, for an officer’s commission during the Civil War, and was appointed assistant surgeon with the 35th U.S. Colored Infantry. His commanding officer was Colonel James Beecher, the half-brother of Harriet Beecher Stowe. DeGrasse was brought up on charges of drunkenness and conduct unbecoming an officer, and in 1864 was dismissed from the Army. The evidence and circumstances, as reviewed by several historians, support the conclusion that the charges may have been false, the exaggerations of an unhappy subordinate (white) medical officer. DeGrasse returned to Boston and died of tuberculosis in 1868.

Return to exhibit home page | Explore Tools of the Trade