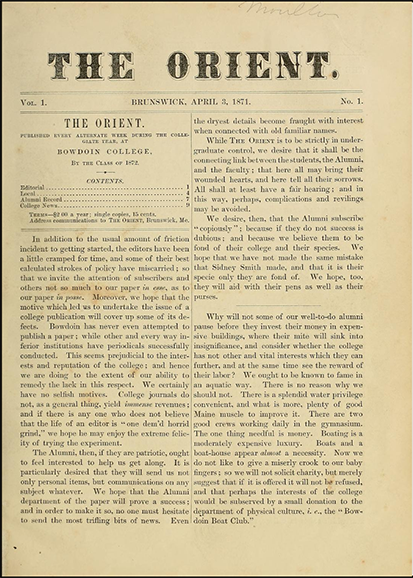 The Bowdoin Orient was established as the student newspaper in 1871 and has been published continuously since, though from the initial April 3, 1871 issue until April 7, 1873 it was named the Orient. Originally issued bi-weekly, it has been a weekly since April 1899. In this inaugural issue, student writers expound upon Bowdoin’s grading system, the “Gunpowder Plot” at Harvard and other updates from New England colleges, plus a section devoted to alumni updates. On the subject of academic courses, Joshua Lawrence Chamberlain, Class of 1852, receives high praise:
The course of lectures given this winter, under the auspices of the class of ’71, is one of the best there has been here for several years. Gen. Chamberlain opened the course. For eloquent delivery, animated and vivid description, and excellent language, his lecture has been unsurpassed.