The Need for Women Proctors 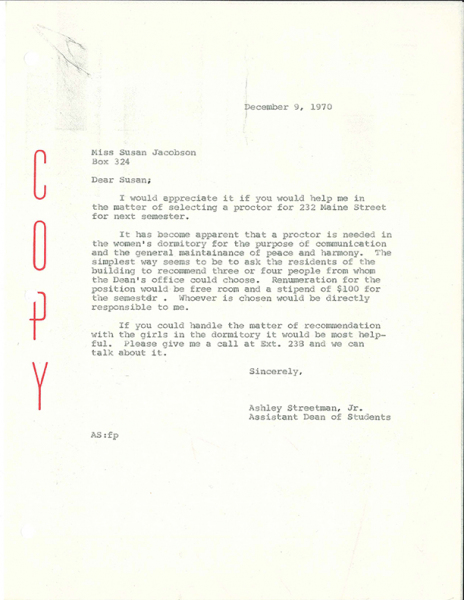 In the fall of 1969, Bowdoin welcomed the first women students to campus through the Twelve College Exchange Program. Although most dormitories had an appointed proctor as a resource for students, the exchange students lived together in the Haskell House at 72 Federal Street with no proctor. At the end of the fall semester, the Assistant Dean of Students, Ashley Streetman Jr., wrote to exchange student (and later, first woman Bowdoin graduate) Susan Jacobson requesting her recommendations for a woman to act as a proctor in the women’s dormitory. He confessed that Bowdoin had not anticipated the need for a women’s proctor, but they intended to hire one for the spring semester. In the spring of 1971, Belinda Bothwick became the first woman proctor at Bowdoin. Today, forty-five of the eighty-one Residential Life staff members identify as women.