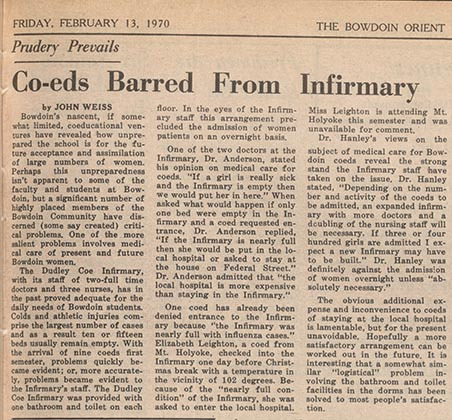 During the transition to coeducation, the College realized the need for separate men’s and women’s bathrooms in campus buildings as well as accessible menstruation products. Barbara Kaster, one of the first women professors at Bowdoin, recalls a story in which she told one of her colleagues, Ann Pierson, to call the head of facilities after Pierson had left several notes on the menstruation product machine asking the janitor to fill it with no response. Two days later, Pierson reported that the machine had been ripped off of the wall. Kaster called LeRoy Greason, the dean of the College, about the incident, and that night, the machine was reinstalled and filled.

The infirmary, and the College at large, did not have women’s bathrooms or the necessary menstruation products available. This Orient article reports that Elizabeth Leighton, an exchange student, was not permitted to stay overnight in the infirmary because staff did not want the men and women patients to share the bathrooms.