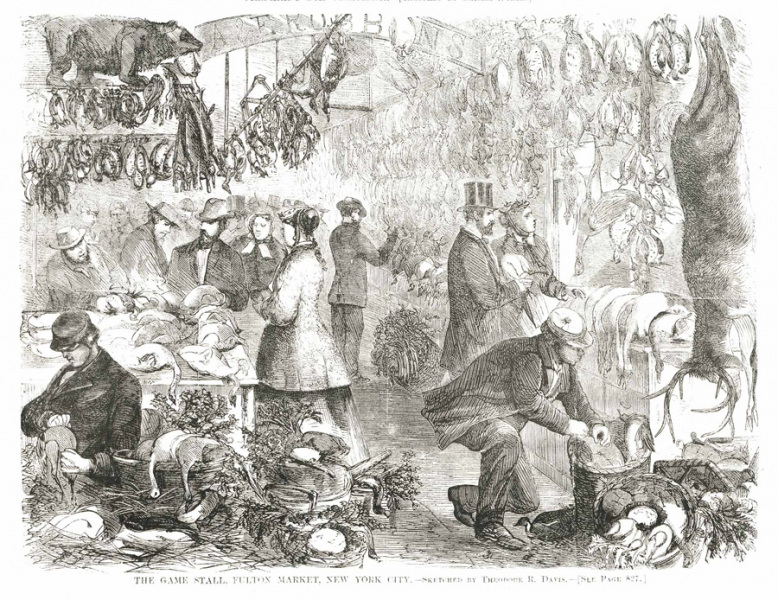 Woodcut, after a drawing by Theodore R. Davis. In: Harper’s Weekly (December 26, 1868), p. 829.The public’s appetite for the inexpensive flesh of passenger pigeons and their fatty squabs helped to make the wild game dealer A. Robbins of New York City a millionaire. Hundreds of barrels, which could hold 400 passenger pigeons each, poured into game market stalls in Chicago, Boston, St. Louis, and New York, quickly transported by the railroads that by mid-century connected hunting sites of mass slaughter in Michigan, Wisconsin, and Pennsylvania to the urban centers. The wild pigeons were both food for the poor and the basis of the finest delicacies served in elite restaurants. Stewed pigeon with peas or mushrooms, pigeon patties with truffles, boned pigeon stuffed with foie gras fed the rich at the New York City Hotel or Delmonico’s. More humble diners made do with pigeon pie.Pigeon prices ranged with season and location. Back in 1830, in Brunswick, Maine, passenger pigeons sold for 15¢ per dozen. When the massive killings resulted in glutted markets, the birds could not be given away.