Benjamin Rush’s "An Account of the Bilious Remitting Yellow Fever, as it appeared in the city of Philadelphia, in the year 1793." Philadelphia: Thomas Dobson, [1794]. 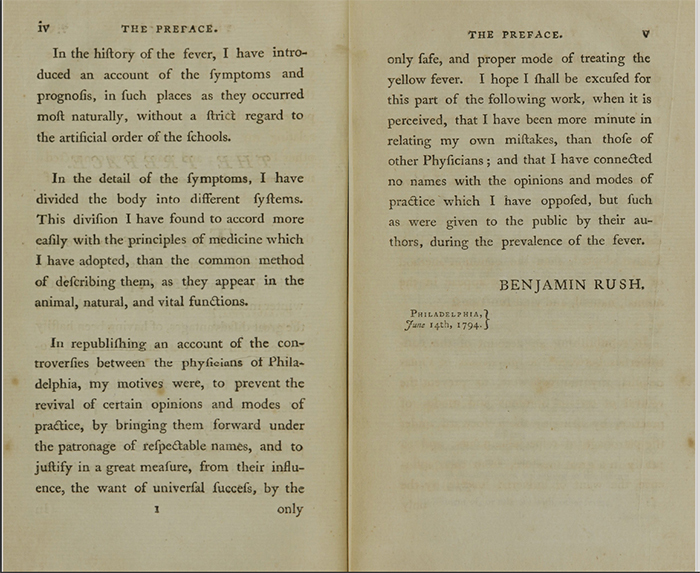 Benjamin Rush (1746-1813) was a physician, a civic leader in Philadelphia, and a signer of the United States Declaration of Independence.

In 1793, after over thirty years without an outbreak, yellow fever hit Philadelphia killing thousands of residents in a span of just a few months: the total number of cases was estimated to be approximately 11,000 with a mortality rate for the city of 10%. As a professor of clinical medicine at the University of Pennsylvania, Dr. Rush observed the symptoms and spread of the disease closely, hoping to uncover some definite cause and means of prevention. Rush kept meticulous notes about his individual patients as well as about conditions in the city for many years. His notes ranged from the observation that “A meteor was seen at two o’clock in the morning, on or about the twelfth of September” to several remarks that “Moschetoes” were “uncommonly numerous.”

Rush, however, did not seem to draw any conclusions about the presence of the mosquitoes in relation to yellow fever. He favored the “miasma” (pollution) theory of the disease that was widely accepted at the time. In 1793, its proponents blamed the yellow fever epidemic on the miasma from a shipment of rotting coffee that had been dumped at the docks.