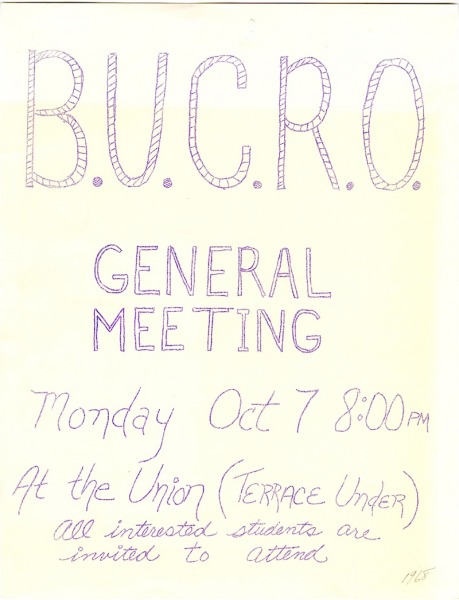 The Bowdoin Undergraduate Civil Rights Organization was founded in in the mid-60s by Virgil Logan, a black student from Dayton, Ohio and Project 65 recruit, and Bob Ives, both class of 1969. BUCRO assumed the responsibilities of Project 65 and hosted civil rights events and speakers on campus. In the organization’s first year of recruitment work, sixteen black students entered Bowdoin in the fall of 1967, and another thirteen in 1968. BUCRO also hosted Human Rights Day in Maine following the police shooting of an innocent Passamaquoddy man in Yarmouth, established the Martin Luther King Scholarship Fund at the College following his assassination, and conducted a Teach-In on Racism on April 5, 1968. BUCRO urged Acting College President Athern P. Daggett to establish a Committee on Bowdoin’s Responsibilities to the Disadvantaged, and initiated demands for a program in black studies starting in the 1968-69 school year.