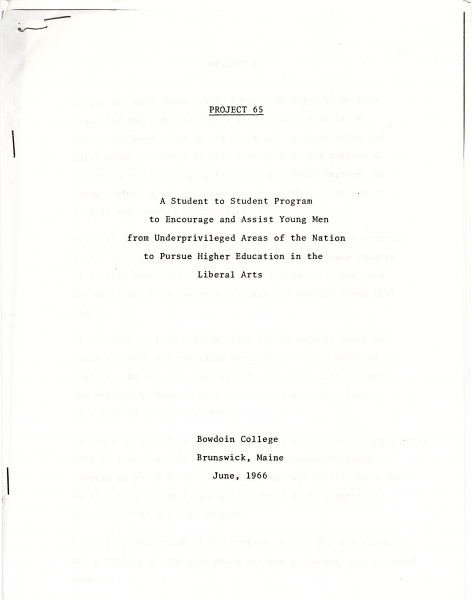 The Morehouse Exchange ran until 1966. It spurred a handful of Bowdoin students to expand integration efforts on campus, including Project 65, which students Ed Bell ’66 and Tony Moulton ’67 founded in 1963. Beginning that fall, Bowdoin students involved in the project began traveling during academic breaks to cities around the country to visit predominantly black high schools to encourage students to attend Bowdoin. Their goal was to recruit 65 black students to the College. Following their first year of effort, ten black students applied to the College, five matriculated in the fall of 1964, and three graduated. In 1965, the Rockefeller Foundation named Project 65 one of the top fifteen most creative integration efforts in higher education in the nation, granting the College with $150,000 to continue the project. That year, thirty-eight black students applied to Bowdoin, but only six were admitted per the College’s scholarship funds.